Watch out for Snake Worms (aka Jumping Worms) 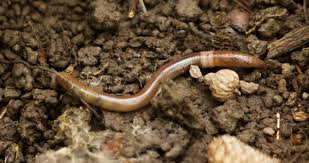 Snake Worm
Not only are there invasive plants, we also have invasive animals. If you see a group of worms near the soil surface that move quickly and have milky-white bands, they are probably Snake Worms from Korea and Japan. An annual species, they emerge from cocoons and are fully mature by mid-summer. You may also notice that the soil texture where you find the wiggling worms looks like coffee grounds. This quick digestion of soil is quick spreading and degrading, often destroying natural habitats. It is a permanent change to the soil.
The Snake Worms have one generation per year in Massachusetts and are sensitive to cold temperatures. They will die out with frost.
No effective methods of suppression are known for this species. We can only carefully inspect all organic matter products (compost, mulch, and soil) before spreading on garden beds to avoid importing snake worms from one area to another.

What’s the Difference Between Ragweed, Goldenrod, and Silverrod?
September 20, 2022

Managing Drought in the Landscape – Level 2, Significant Drought, Declared in Our Area
July 29, 2022